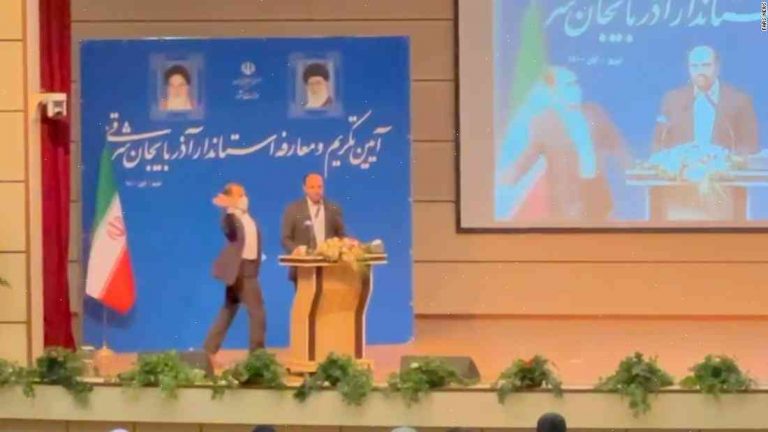 A former Iranian governor and veteran political dissident has been slapped in the face during a public speech about elections in the Islamic republic.

The assault came after a group of protesters closed in on Hossein Essad in the western city of Amol. Video of the attack showed Essad shouting: “Stop the violence!” before he was slapped on the right temple by a protester.

Writing on his Twitter account, Essad said: “They [the attackers] chanted slogans against elections. I was dragged, caught and hit by dozens of people.”

The beatings happened as supporters of the country’s first post-revolutionary presidential election had gathered in Amol to celebrate the weekend.

The attack was a continuation of the past year of clashes and curbs on opposition groups ahead of the poll to choose a successor to Mahmoud Ahmadinejad, who was re-elected by his narrowest margin in 2009.

In April, one of Ahmadinejad’s most prominent rivals in 2009 was detained as he prepared to go on trial on charges of insulting Islam. Abolfazl Maarouf was detained with his wife two weeks after a mass demonstration in his support last month.

Despite the prospect of a stormy election with no clear favourite, the election is likely to run in parallel with a new Guardian Council. The judiciary has tried to tighten its control on legal manoeuvring to implement the results. On Monday, at least six prominent lawyers and activists were arrested while trying to meet the head of the Council, Ali Motahari.

The case came amid a series of curbs on the press, opposition gatherings and artists’ freedom of expression that have outraged activists.